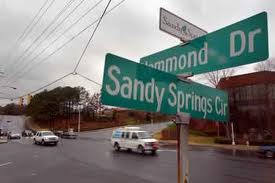 Sandy Springs (formerly known as Hammond) is a newly-incorporated city and suburb in Atlanta, Georgia. It is nestled along Cobb County and the Chattahoochee River to the south, Roswell to the west and north, and Dunwoody to the east. Sandy Springs was named after the sandy springs, a protected historic site still present in the city today. Sandy Springs is considered the eighth largest city of Georgia. Its population was approximately 93,853 in the 2010 census.

Sandy Springs is one of the most elegant, genteel and affluent residential communities in the Atlanta Metropolitan Area. Characterized by stately, luxurious homes with lush landscaping and an economic base consisting of residents who have a median family income of over $106,000 per year, Sandy Springs also has an upscale business district where shoppers can find almost everything they want and need. Because Sandy Springs is considered to be such a desirable place to live and work, the population increases by almost 50% on workdays due to the influx of workers who commute to their jobs in Sandy Springs. Another outstanding characteristic of Sandy Springs is the friendly and courteous style of Southern hospitality that has traditionally made visitors feel welcome and comfortable.