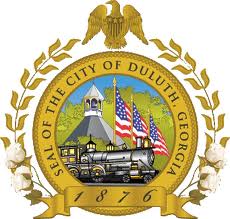 Duluth is a city in Gwinnett County, Georgia and an increasingly more affluent and developed suburb of Atlanta. Unincorporated portions of Forsyth County also have Duluth as a mailing address, though this area is outside city limits. Much of the adjacent city of Johns Creek (incorporated in 2006) uses one of the Duluth ZIP codes.

The population of Duluth was 26,668 at the 2010 census, making it the second most populous city in Gwinnett County, behind Lawrenceville.

Duluth is a suburb of Atlanta, close to Interstate 85. It is home to Gwinnett Place Mall, Gwinnett Civic and Cultural Center, Arena at Gwinnett Center, Hudgens Center for the Arts and Red Clay Theater. It is also home to Gwinnett Medical Center - Duluth, an 81-bed hospital constructed in 2006, as well as GMC's Glancy Campus, a 30-bed facility located near downtown. Nearby attractions include Stone Mountain and Lake Lanier. The agricultural manufacturer AGCO is based in Duluth.

According to Forbes magazine, Duluth ranks 26th in the nation in America's Best Places to Move. It was also named the Best Affordable Suburb in Georgia by BusinessWeek magazine.